A downloadable game for Windows, macOS, and Linux

When a lonely little alien is stranded after a crash, an unlikely partnership is formed between them and an odd girl who is determined to help them get back to their ship. Where is their ship, you ask? The moon, of course!

A puzzle-adventure demo created for the 2018 Indie Game Making Contest!

Includes:
- a lighthearted story
- puzzles to solve
- many beautiful stars

Arrow keys: Movement
Shift: Hold to run
Space/Enter: Interact / Confirm
ESC/X: Menu / Cancel
The game autosaves over the first file. You can disable that from menu.
The demo is 20-30 minutes long.

We are Cosmic Latte!

Please report all the bugs and similar things to us.
On very rare occasions the game might crash. If that happens, load the game and it should be fine.

Get in touch with Team COLA:

aww this demo is so cute! will it ever be updated? :>

hey i remembered this game from long ago, if you guys can see this please finish the game it was really good. Thank you for making it.

its so cute!!! adhafsvjb im in love with the demo

Thanks for the demo! I'm eager to see the full release!

Not sure what you've already fixed since, so some feedback and bug reports:

- Linux: only the Linux/nw version worked. Linux/Game and Linux/nwjc crashed with different errors. Not exactly sure why there are 3 versions if what we really need on PC is wrapper around the web version, but here are the logs (when starting from console):

(it's used for compiling, so I don't think the user should run it?)

- Typo: numberic instead of numeric in one of En's lines

- UX: doors that transition to other areas are harder to distinguish when oriented to South, West and East. Their shapes are closed so they just look like curved parts of the wall. Consider keeping the shape open, maybe add some light gradient if you want to indicate the door is open (you'll find plenty of references in top-down RPGs and adventure games, and plenty of them are pixel art)

- UX: There is one save panel near the end of the demo where you must go through a few lines "let's go to the elevator" before opening the save popup.  If possible, make the save immediately accessible, at least the second time you watch the panel.

- UX: I'd say if you get caught by the guard you are respawned a bit far, but in makes sense story-wise as you get back to your room. Seriously it wasn't a big issue for me, I simply got more and more careful each time.

- UX: I tried various words in the terminal search, but could not find information on my first searches "elevator" and "exit", which makes me think we get more access to a generic DB (with specialized knowledge, for sure) than a Q&A for people working in the station. Maybe this could be made clearer? The first dialogue about the terminal is about searching information on this place and showing a map... I didn't try to search "map" though, maybe that was it?

- UX: I tried various words in the terminal search, found a key narrative element yes, but that shouldn't have impacted the station. When I came back, the door was open, I guess this was it, but it's not very clear what happened. From a narrative perspective you probably want to force the player to find that narrative hint, but from a logical perspective I'm not sure what opened the door. You could cheat though, by making the terminal room darker (except for the terminal), then just after the key narrative search lighten up the room, and En would say "oh, power has come back!" so you force the player to do the search but you also let the player know he/she can come back after that.

- Graphics: small "glitch" when the characters are climbing up the spiral staircase, as they must switch layer to go from "behind" the stairs to "in front of" the stairs, when reaching the left side. You're probably aware and didn't find a good solution for it... I don't have an idea either, but since this game focuses on writing and aesthetics that may be a thing to tackle in the Polish phase.

I always adore the things you guys put out! This demo was super adorable and fun; can't wait to see the rest of it!

First game I downloaded on itch. Very well put together! Feels so fluid. The sound effects and assets are on point! Well done.

En reminded me A LOT of the movie CJ7, very cute.

Ahhh, it's so good to see you back with another game! Paletta is still one of the most beautifully written and presented games I've had the pleasure of playing, so when I saw this new demo pop up I added it straight to my list!

As expected, it's cute as heck and has a riveting story. Mir and En are a great pair, and I certainly hope you dive back in to add more to this tale because I could spend hours with these two =)

The puzzles mixed with the stealth elements made for a very interesting experience too, it was a great combination! Keep up the awesome work as always, I'll be lurking around waiting to see more of this for sure!

This is a very nice looking demo. Just 2 questions. Are you planning to make it into more than a demo? and if so what do you think the price point will be?

Thank you<3 Yes, there will be a full game! We aren't sure about the price yet.

Hi, so far I like the design of this game, good job! But I encountered a problem: I couldn't save the game, and every time I press 'option' and then 'esc', it shows an error message and I couldn't do anything afterwards. (Btw I downloaded the one for Mac.) Is there a problem for the Mac version?

There's blue panels/screens occasionally on the walls to save.

never played such a good game in a while. Its very detailed and the sound effects are so good!!! hope you finish the full game soon~

Awww thank you so much<3

This little bundle of joy is "out of this world"! :D Looking forward to post demo content! ^^

Fun, cute and love the storyline!!!

This was so incredibly cute! I love the two main characters and I'm aching to know if they'll get to the moon or not! The pixels and general aesthetic of the game is also very beautiful so amazing job team Cola!!!

thanks so much!! ^^ we're glad you enjoyed the game and the characters!

Oh this looks absolutely adorable. I am gonna play this the very moment my cat stops bothering me! 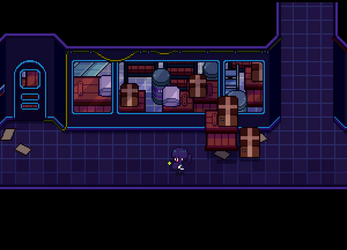 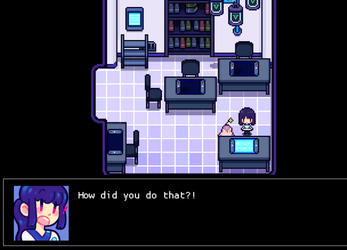 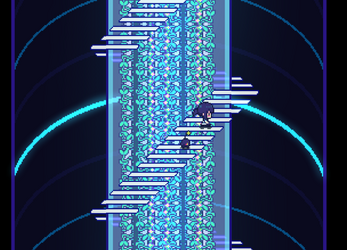